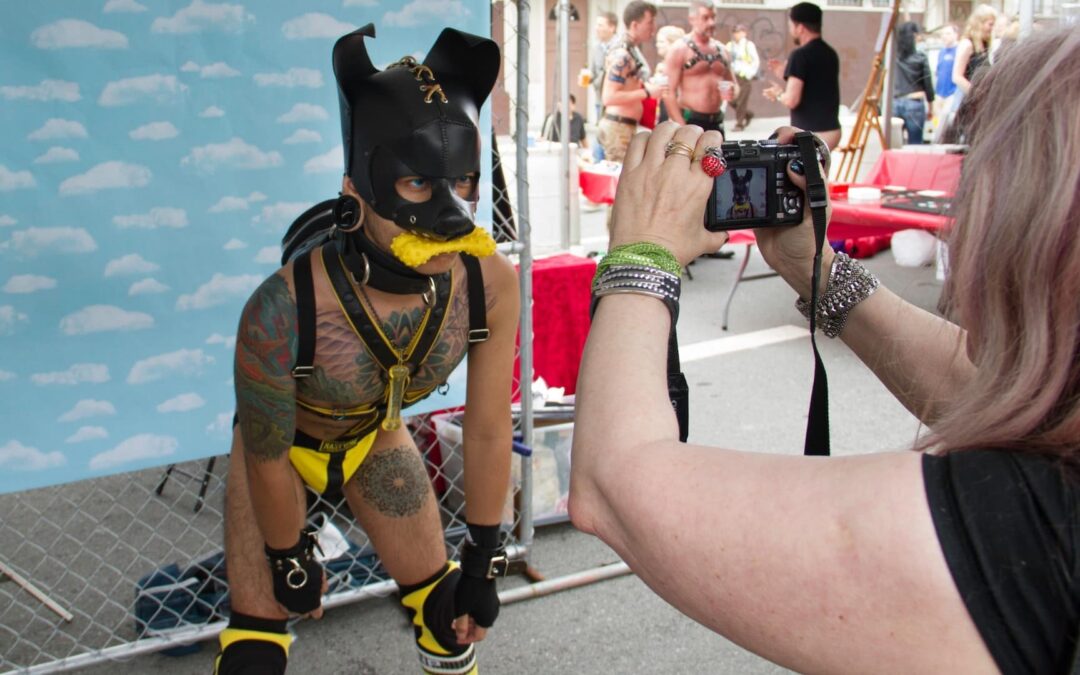 Puppy Play is a form of Pet Play, or Animal Roleplay, where humans take on the persona of non-human animals, in this case, dogs or other canines or their handlers. So, where does this fetish come from?

This article is a shortened version of my essay on The Origins of the Pet Play Fetish, which I have written for the seminar “Philosophy of Sex” at the Humboldt-University in Berlin, and which you can download as a PDF here.

A couple of years after moving to Berlin–long before I started giving my guided tour about Berlin’s History of Sex–I visited the gay-lesbian street festival. It’s a weekend-long queer event happening each year before Pride. I was standing by some info booth when suddenly something to my left caught my eye. A very tall, muscled, dominant-looking man was standing there, all dressed up in leather. He was talking to a woman in very regular clothes, chit-chatting, I assume, as they seemed friendly with each other and smiling.

A Man Dressing Up as a Dog

Next to the woman was a small child, I would guess about five years old, and I assume the woman was his mother. The mother was chit-chatting to the man in leather. And the child was laughing uncontrollably at a dog barking at him in front of him. Only the dog wasn’t a dog. Instead, it was another man dressed up like a dog. And the man in leather was his handler, holding him on the leash.

The Child and the Pup

The “dog” was barking at the child. The child was laughing. And the mother was chit-chatting with the handler as though this was the most regular thing in the world. This was one of the first times I was faced with pet play. (And it’s moments like these that inspired me to study sexuality in Berlin and to launch my guided tour about Berlin’s History of Sex.) The following years saw an uprise in this fetish like almost nothing I ever saw before. Pet play, especially puppy play, became such a beloved fetish, and I was fascinated by it. I wanted to understand why more and more people got a sexual kick out of dressing up as non-human animals. And why is the dog the most commonly used species for pet play?

2. What are Pet Play and Puppy Play?

But first, we must define what pet play and puppy play are.

What is Pet Play?

What is Puppy Play?

Pup Play, or Puppy Play, is a specific form of pet play. Here, humans take on the persona of dogs or other canines, especially puppies, as well as their handlers. It seems that dogs are the most commonly used species for pet play, and in this article, I will try to propose an answer to why that might be.

Pet and Puppy Play Are Not Necessarily Sexual

Now, Pet and Puppy Play are not always sexual. Some people also engage in exclusively non-sexual pet play; others might change between sexual and social pet play. Apart from sexual pleasure, studies also found other motives for joining in Puppy Play, which are

Especially the motive of relaxation, therapy, and escape from self is linked to what puppy players call “headspace,” which they allow themselves to fall into. In studies, puppy players described this headspace as almost a “Zen-like, preverbal state” that allowed them to relax after a hard day at work.

Pet and Puppy Play Are Not Zoophilia or a Pathology

3. What Are Sexual Fetishes?

Now that we have defined Pet and Puppy Play let’s move on. In this article, I will specifically look at the sexual aspect of Puppy Play by proposing to apply my theory of the origins of sexual fetishes. For this, I first need to define what I mean by fetish.

The Idea in the Fetishist’s Head

For example, suppose a man enjoys having receptive anal sex because he enjoys the feeling of something penetrating his anus. In that case, I do not define this as a fetish. However, suppose this man somewhat feels that it is degrading for a man to be fucked in his ass, and this idea of degradation contributes to his arousal. In that case, this is what I would define as a fetishization. The man thinks in one way or another (either because he believes so or because society tells him so) that he shouldn’t let somebody else fuck him. And this taboo is what makes it arousing for him. That’s what I call a fetish.

However, personal or individual fetishes are those that only exist among a tiny number of people or maybe only within one person within a given culture. For example, if somebody gets turned on by watching someone else eating an apple. Or by paying someone else’s dentist bills. I met people who are into that. But it’s so rare that I would classify those as personal fetishes.

The border between the two is blurry at best. As a rule of thumb, I would say: If you can make money with it, it’s a social or cultural fetish. In Berlin, for instance, there are parties for many fetishes that some people would think are personal fetishes but that actually exist so often that there are sex parties for them. You can find out more about these in my guided tour about Berlin’s History of Sex and my guided tour about The Story of Berlin’s Clubs.

I focus on cultural, sexual fetishes for my fetish theory, i.e. those that exist quite regularly within a given culture. This is because I analyze fetishes with sociological theories of socialization. Socialization is the process that teaches us subconsciously to act, speak and even think according to what is considered “normal” in our culture. For more details, check out the more extended essay PDF version of this article.

Humans Are Animals and at the Same Time, the Opposite of Animals

Some elements that play a massive role in our socialization, apart from, for instance, gender or race, are species and culture-nature-dualism. The latter can also manifest itself as human-animal-dualism. Culturally, we often see animals as the opposite of humans. But scientifically, humans are part of the animal kingdom. We are one animal species among many. But when we talk about animals – and it is this meaning that is dominant – then we mean millions of different species, from the worm to the gorilla, with humans excluded–even though the gorilla has more in common the human than with the worm. Like the social scientist, Birgit Mütherich said: Humans are animals and, at the same time, the opposite of animals.

This human-animal-dualism is central to the idea of domination over nature by (Western) human culture. The animal becomes the key symbol of this domination over nature. The dichotomy of humans as the opposite of animals is internalized by all of us over our socialization. However, this not only leads to the control and subjugation of animals “outside human beings.” It especially also leads to the control and subjugation of what we have learned to see as “the animal within ourselves.”

Remarkably, many of our kinks are directly or indirectly linked to that image of nature and “wild animals.” It’s those denotations that make “wild sex” wild. Piss-sex, BDSM, exhibitionism, sex with faecal matter, and so on: Either all these fetishes are linked directly or indirectly with natural/body processes, or they remind us of our own naturality, of the “animal within.” Or they may also be related to the loss of control over that “animal within” – a control that we have so laboriously learned via our internalized socialization. In my guided tour about Berlin’s History of Sex, you can discover more about the history of sexuality and some sociological and psychological concepts behind it – all in Augmented Reality!

It’s clear that some people get pleasure, often even sexual pleasure, from doing the exact opposite of what we are taught. They enjoy taking on the role of an animal in pet play. So how is this possible?

My suggestion is that this form of socialization inevitably leads to enormous internal pressure. We cannot consistently control these inner tensions between what we are (i.e. one animal among many) and what we are supposed to be (i.e. the opposite of an animal). Therefore, these tensions have the potential to discharge themselves in play, sometimes even in sexual play, by letting ourselves fall into precisely what we are supposed to avoid altogether. In other words: it might turn us on to allow what we should continuously suppress. The forbidden, the danger, the taboo develops at the same time a powerful potential of arousal and relief. Because we must always control our “inner animal”, it can be incredibly arousing for us to allow the forbidden, let ourselves fall, and “become an animal”. Thus, the Pet Play fetish is born.

But out of all the species, why are dogs the most commonly used one? Of course, there are similar fetishes with other animal species, such as cats, horses, pigs, foxes, etc. However, no animal species seems to be better suited for pet play than dogs. And there is a reason for it: No other animal species’ domestication is more visible in most people’s everyday lives.